I know that PR leaders have been calling for special parliament seating to discuss on what’s going on in Lahad Datu, Sabah, and why they are not being briefed or consulted.

I do understand that PR being part of the parliament and MPs for areas they’ve won and elected by rakyat, they deserve to know, briefed and consulted.

However, being a citizen who follows the development in Lahad Datu and do not like this issue being politicized, I’d think better for Pakatan Rakyat to stay away and not being briefed or consulted on details of what’s going on in Lahad Datu, Sabah, for the following reasons:

1- Reuters and Manila Post have reported that opposition member is suspected behind the incident (perhaps Manila Times should also be sued because clearly naming DS Anwar Ibrahim). Reuters report can be read here.

2- Remember what Tian Chua reportedly saying (after 2 PDRM commandos killed in an attack?) 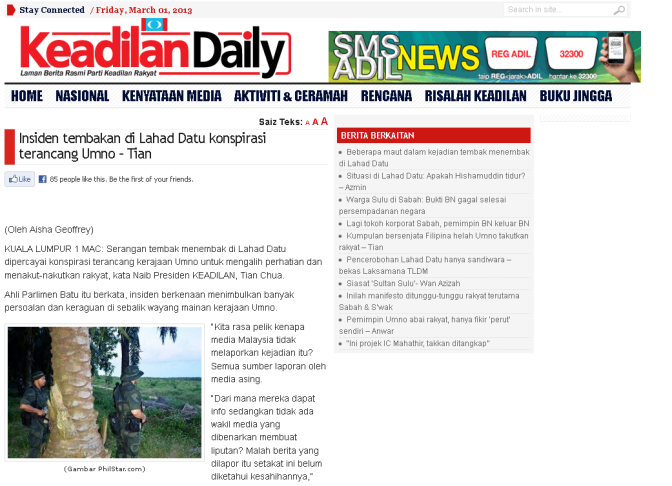 3- Latheefa Koya as one of those in PR (YB Nizar Jamaluddin as another example) keep on questioning the ability of our armed forces. Not just about the usage of Air Asia to transport our troops to Sabah, also just questioning why can’t detect them from entering.

ISA has been abolished, so, being the “expert” in preventive action, can anyone advise, under which act, if we were to arrest them? Remember the those arrested in Sabah back in 2011, in which caused an uproar by opposition members?

So, tell me, what action should we have taken… when our force’s work keep interrupted by fancy lawyers and opposition?

I gave you 3 reasons, in which, actually, the first one alone is strong enough for not allowing PR to be briefed or consulted.

I may disregard Manila Times report saying DS Anwar as responsible. In which, this make anyone of you in Pakatan Rakyat, being the opposition, as a potential culprit. Inviting PR, could be allowing the culprit to know the security details and jeopardize Malaysians safety.

Therefore, setting aside political sides, I am in opinion that Pakatan Rakyat should stay away and not being briefed and consulted on Lahad Datu incident… as one of you (disregarding DS Anwar as reported by Manila Times), could be the one has caused us troubles and our men died.

Question on the street: Can we put aside political campaigning while we are at crisis… please?

8 thoughts on “#LahadDatu: Why It Is Best Pakatan Rakyat To STAY AWAY & Not Being Briefed”