I am pretty much unsure of what or where Dr Dzul is going to with “low indian equity” matters. This is because, not just Pakatan Rakyat have been constantly accusing Barisan Nasional playing racial cards (considering the form of Barisan Nasional is made of few race-based parties), they have been addressing that they will look matters based on merit, not based on racial lines.

Another point that I hope he or any of Pakatan Rakyat members can clarify is – how much of the equity that Pakatan Rakyat intend to raise when they brought up this kind of issue? On whose expense and by what?

Seriously, I am quite confused on Pakatan Rakyat’s approach of doing things. At one point, they accused of Barisan Nasional of being racist of such, and in return they said that it should be based on who needs (not race-based).

For example, let us look in a debate between YB Senator Gan and YB Dr Mujahid, where YB Mujahid was asked on economy distribution by a commentator: 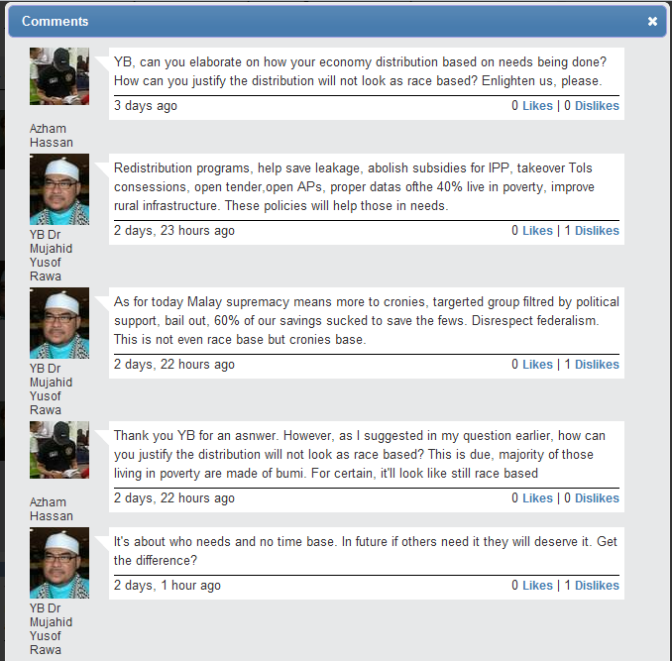 See? None was mentioned about who getting low equity or so what not.

So, I do hope Dr Dzul or any of PAS or Pakatan Rakyat members can clarify and the intent when addressing low indian equity.

Suffice to say, is it actually Pakatan Rakyat who are actually caused racial tensions?

Or actually, again, this is just another Dr Dzul’s personal opinion?

Question on the street: I remember once writing on asking how Pakatan Rakyat work frame works… can some one answer, please?